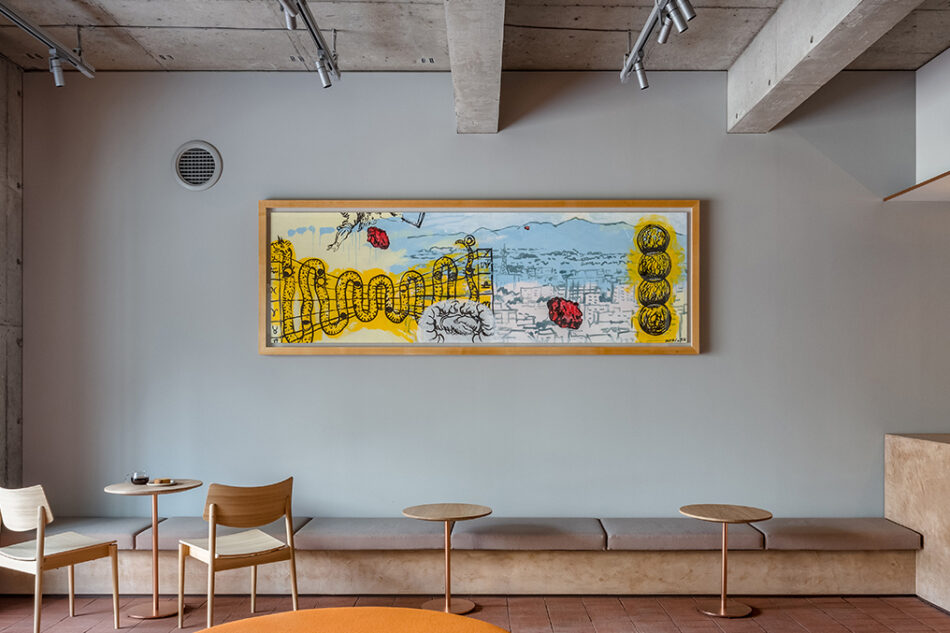 This work is part of Yoshio Shirakawa’s Maebashi Fantasy series, in which he draws inspiration from Maebashi’s present, history, and memory, and returns it to society in the form of art to help revitalize the region.

Alchemical is a distinctive and prominent motif in the series, and this imagery appears in Dragon God of Mount Akagi as well, superimposed on a view of the mountain itself.

The dragon legend of Mount Akagi goes back to ancient times, and residents have lived and cultivated a local culture in the context of these stories. This work casts Maebashi’s residents as alchemical philosophers, with the “philosopher’s stone”—which symbolizes new life and ways of living—appearing in the form of the energy and opportunity the city needs to regain its vitality in a new form.

Shirakawa has spent many years transmuting his relationship with the region into works of art, and this piece might be called a message of support from the artist for the Shiroiya Hotel and for Blue Bottle Coffee, which operates a cafe on the hotel premises.

Yoshio Shirakawa was born in Kitakyushu, Fukuoka Prefecture, in 1948. In 1970, he travelled to Europe to study philosophy at the University of Strasbourg’s Faculty of Literature. He was admitted to the École nationale supérieure des beaux-arts in Paris in 1974, and graduated from Kunstakademie Düsseldorf in 1981. During his time in Düsseldorf, he was strongly influenced by Joseph Beuys’s concept of “social sculpture”. In 1983, he returned to Japan and established a new base in Gunma.