In Part I of this article, architect Sou Fujimoto spoke about how the renovation idea of Shiroiya Hotel started and how it developed over time. In this part II of the interview, he discusses his architectural inspirations and thoughts while bringing the new hotel to life.

What’s particularly interesting about this project is that there was originally a pathway leading from the national highway to Babakkawa-dori Street. It was more like an outdoor service corridor than a pathway, actually. The Babakkawa-dori Street side was a parking lot at the time, so it was not an active pathway — but I was certain that this project would be complete if integrated with the pathway. The hotel’s atrium, too, I envisioned not just as an interior lobby but a plaza space facing the pathway. The causeway forms a single line, but when it meets the embankment, a sense of aerial expanse comes into play, and this line becomes free and three-dimensional in an intriguing way.

More than ever, architecture and the city are beginning to merge. It would be unfortunate to separate streets from buildings, as we have done in the past. There are various possibilities between the two because of the gray area, and therefore, there is much potential. I think that the use and design of public spaces such as stretts and architecture, which are half public and half private, will be questioned increasingly further in urban spaces in the future.

If we go even further, instead of all these self-contained, stand-alone buildings, it would be so interesting to see urban and living environments designed in a way that we can’t fully grasp how much of it is architecture, how much is a street, how much is a public plaza, how much is a hill, and how much is a forest. I feel that we might be able to create an inviting urban space that is both comfortable and exciting to walk around in, something we have never seen before. Shiroiya Hotel, in a way, mixes all of these elements freely. We consciously constructed it as such. 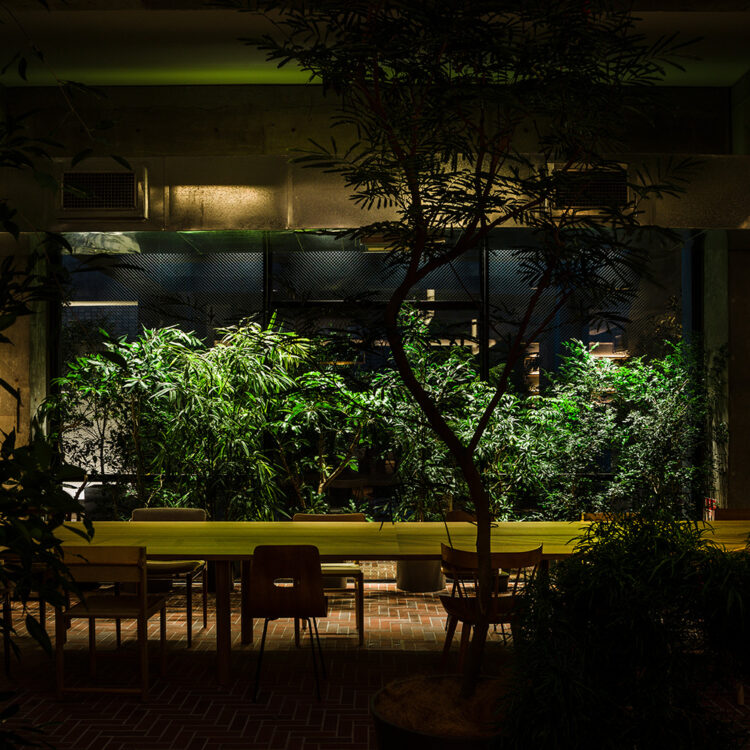 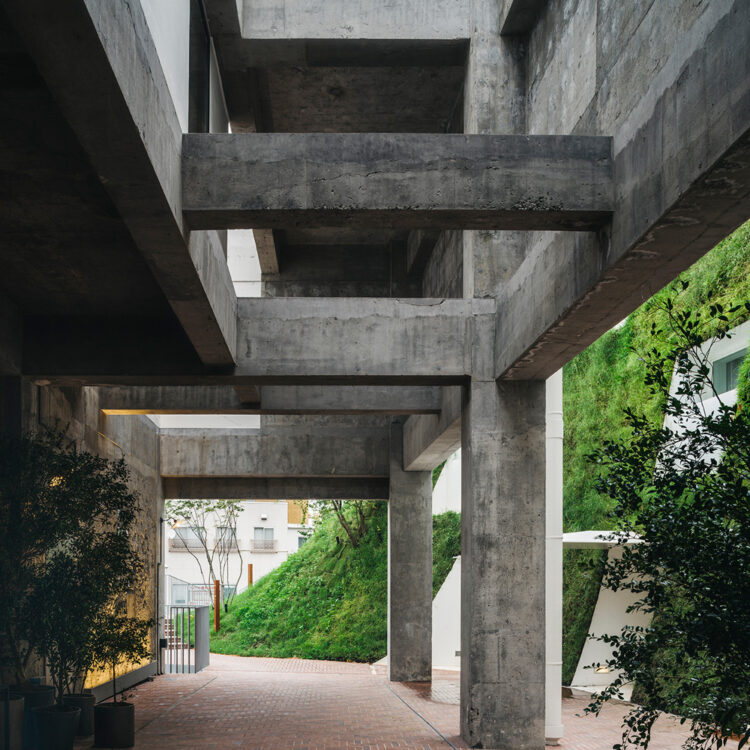 The importance of listening carefully 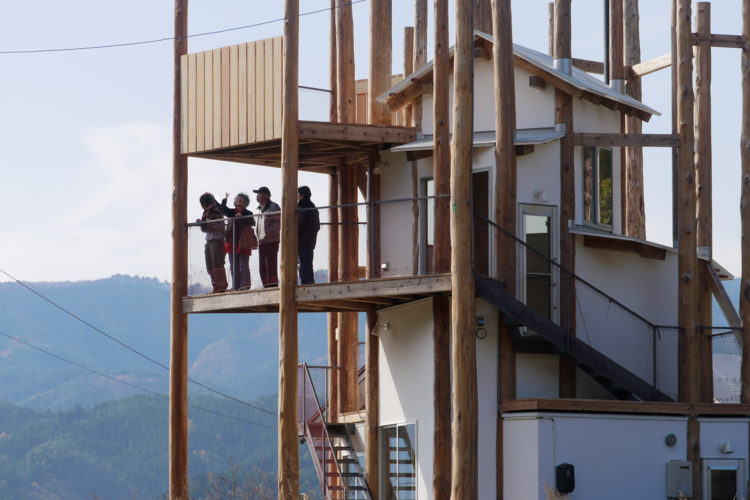 Looking back, we had a strong sense of developing and proposing our architectural methods when we built “Home-for-All” (2012) in Rikuzentakata, a town heavily destroyed by the Great East Japan Earthquake, we all tried to develop and pitch. At the time, we discussed how to relieve this critical situation, but it regrettably turned into a kind of me-me-me situation, and things became quite confusing — this continued for about half a year, and eventually, everyone got pretty tired.

hen I revisited the site later, rather than suggesting something myself, I became aware that the approach to architecture comes naturally from careful observation and listening to others. I began to listen carefully to what the area was saying. In that sense, we started this project by “listening” carefully to the original building’s voice. We kept asking ourselves, “What does it want to be?” I also thought that the topography, and the drop in elevation between the national highway and Babakkawa-dori Street, made this a unique place.

We had regular monthly meetings during which the words of various people constantly stimulated us, and we found that our ideas were continuously reexamined. Somewhere along the way, as I continued to listen, we realized that we inexplicably were drawn to see the ancient topography and human-created town containing something essential and fundamental.

That’s where the embankment idea came from, and I think it resonated well with the four-story interior atrium. It would probably not be significant if it were just an embankment. But the discovery of a new kind of public space beyond the banks, built on the longstanding heritage there — this was perhaps inherent in the entire process of our strive to listen carefully and continue to experiment with various things. 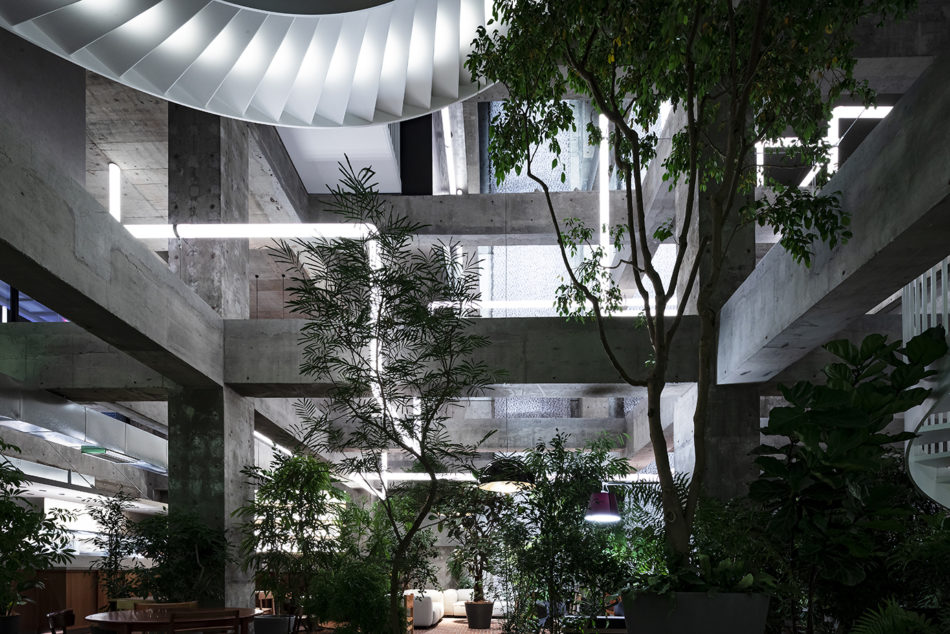 We had regular, casual monthly meetings for quite a long time. Sometimes we decided on specifics based on blueprints, but we didn’t set a strict timeline for how we wanted the hotel to look or evolve. This approach turned out to be very useful in enriching the project as it managed to incorporate various elements intriguingly.

Tanaka would often come up with stuff out of the blue, too. He’d come to me saying things like, “I have this idea, why don’t we try it?” and “I’m making glasses with Jasper Morrison right now, so I talked to him, and…” Then Leandro (Erlich) came up. And so on and so on. A lot of things got involved. Perhaps it was because we took our time, but I think integrating these various ideas, which remained distinct in a positive sense and letting them mature was a kind of our design process in its own right.

There is this striking concrete frame with a four-story atrium, but that’s not all. Various things are clustered around it, creating an ecosystem-like whole. There are multiple layers, or rather just richness. It seems to be maturing gradually. It’s fascinating — each element’s merits draw out the others’ merits, creating a kind of microcosmic diversity synthesis. It is difficult to achieve this in architecture alone. I want to create something like that in architecture. Still, there are other essential considerations to make, like the client’s vision, for example. There are also all kinds of fateful coincidences.

There has always been the cultural and historical background of the city of Maebashi, and, of course, the background of Shiroiya Hotel. I think its deep connection to the town’s background is what makes the project profound. Architecture and all various genres were blended over time, allowing them to mature into one solid harmony. So even looking at the hotel today, I was amazed at the variety of sceneries that appeared one after another. I marveled that they were all part of a single world. I think it’s wonderful that we were able to actualize this.

The potential of an entirely new landscape 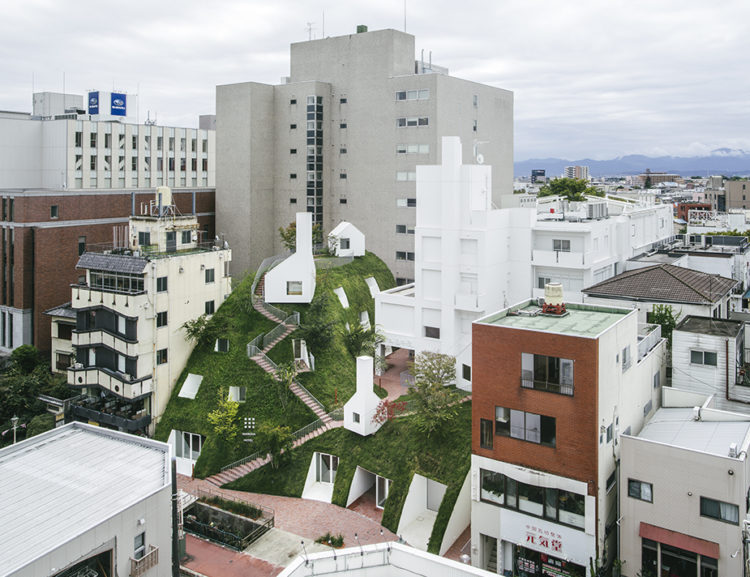 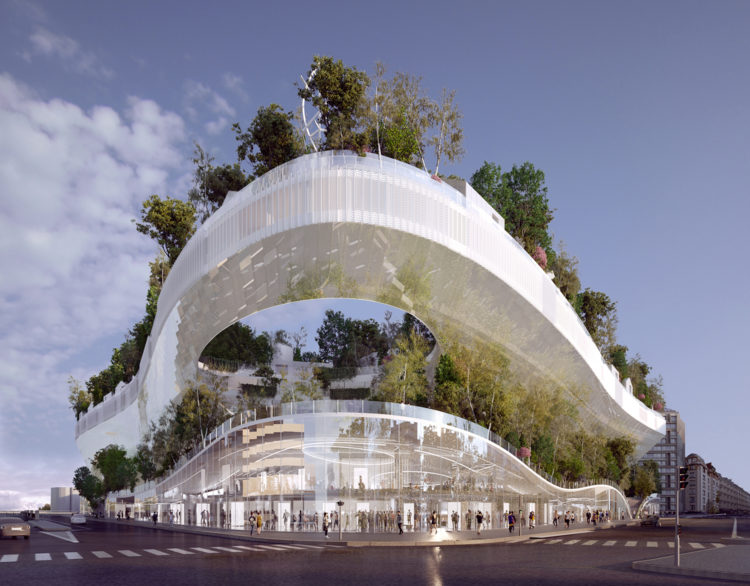 The embankment of Babakkawa-dori Street is not an architectural space. It is more of a standing figure or a state of being. When you bring something new into an old town, naturally, there are ways to carry on the town’s identity. But in this case, on the contrary, we were bringing in a completely new landscape. It would’ve been great if it happened to be linked to something like the ancient topography from before the city was built.

For the past several years, I’ve greatly respected the kind of identity or landmark quality sought in French architectural design. In Japan, the word “landmark” often has a negative connotation. It’s often perceived as something that does not harmonize with its surroundings and is just standing there. However, I believe that in the word’s original sense, a landmark concentrates on the characteristics of a place, area, or region and the various elements cultivated there. It stands there as an identity. The Shiroiya Hotel is a landmark project— it wasn’t built to stand out from its surroundings. When viewed from a broader perspective, it perfectly encompasses the region’s various local and cultural elements, opening them to new possibilities and a future for this place. And so, we created an embankment (laughs).

And then there are the natural undulations of this city. They’re slight but rich. I felt that the variations of the original elevation in Shiroiya Hotel’s terrain had some potential. And even though they are no longer here, I came up with the idea of a wide embankment.

A landmark that links history to the future 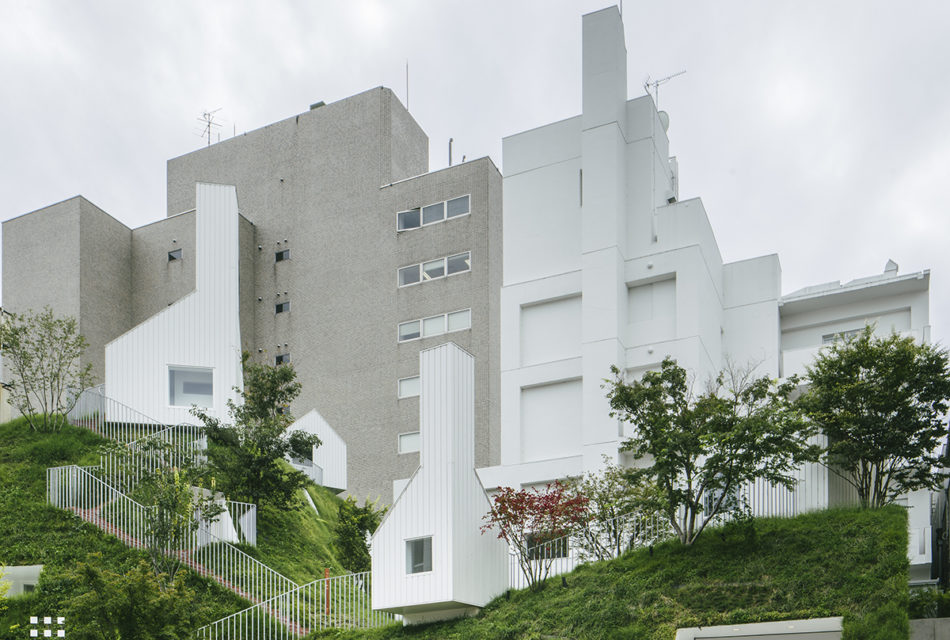 Meanwhile, hut-like structures stand on the banks, which resemble chimneys. The chimney was located initially behind Shiroiya Hotel — I think it was probably designed for a functional purpose rather than the main feature of the building. But looking at it from behind, it looks like a tower, which is quite nice (laughs). If nothing else was there, it might have been overlooked as a mere chimney, but by adding a few chimney-like towers around it, the original chimney tower, its posture, and the way it stands appears well-intended. The landscape is now like a group of “buildings” erected in this embankment’s expanse. What do they symbolize? It’s kind of interesting.

A landmark is not only an appearance but also a place. Rather than referring to a specific thing, it’s a place created by including everything surrounding it. In that sense, creating a huge atrium in the existing building was quite a landmark project, or in other words, a way to maximize the potential of the existing building. As a result, the building becomes a place for people and, simultaneously, a point of contact between the history of the place and building and our present lives. It is also handed over to the future. Although it does not appear as a solid form, the atrium is a unique space for people because it’s very landmark-like and also serves as a place.

So, for me, the embankment and the atrium go hand in hand. The atrium makes the embankment into something inverted, like an open space, a place for people. One side has a substantial form, while the other has no form. But by being a set, both of these entities emphasize not the presence or absence of form but the ability to create places for people. 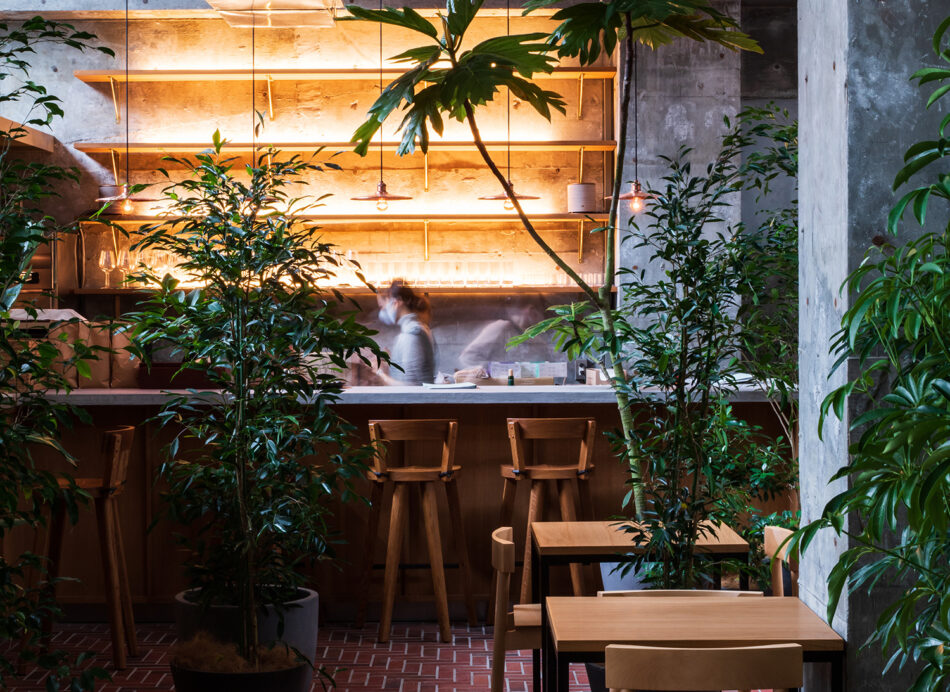 Even if you visit a building only once, it will remain in your memory, where it will continue to exist for a long time. In that sense, I would like Maebashi to be a place where locals frequent on a daily basis, or a place where they just pass through the embankment. That is to say, I feel that the places that exist in our daily lives remain in our memories forever and they bring us strength. Of course, for those who visit Maebashi and stay overnight, it will be a special place for a few days, and that feeling is reflected here too. I want locals and visitors to experience Shiroiya Hotel’s time and space.

Born in Hokkaido in 1971. Established Sou Fujimoto Architects in 2000. Winner of the Golden Lion at the 13th International Architecture Exhibition — La Biennale di Venezia. Fujimoto became involved with the revitalization of the Shiroiya Ryokan project in 2014 and in 2018 became in charge of the surrounding design of artist Taro Okamoto’s the “Bell of the Sun,” which was relocated to Maebashi city. He was appointed the Expo site design producer for the 2025 Japan International Exposition (Osaka/Kansai Expo).

Toward the Future: Architecture, The City and Global Affluence as Seen Thr…