Toward the Future: Architecture, The City and Global Affluence as Seen Through the Prism of Shiroiya Hotel’s Revitalization

“I hope that Shiroiya Hotel will continue to change and evolve along with Maebashi City.”

Thus says Sou Fujimoto, the internationally-acclaimed architect and the man behind the design of the new Shiroiya Hotel. Fujimoto has long been involved with the revitalization of Maebashi through various projects — including the landscape design of late artist Taro Okamoto’s “Taiyo no Kane” (Bell of the Sun) in the city.

We caught up with Fujimoto to hear more about his thoughts on working on Shiroiya Hotel, the hotel’s concept, a few behind-the-scenes episodes, and his vision about the future of the city and architecture.

“The Shiroiya Hotel project began six years ago, in 2014, and underwent several transformations and developments along the way. One of the first things I suggested was to create a large atrium in the main building and it was around that time that the overall design concept took off. When we dismantled the floor and the building’s old pillars and beams appeared, suddenly we could see a vast indoor space, which I instantly envisioned as a place where locals and international visitors would come together to enjoy various events and interactions. Indeed, as the project progressed, it attracted international artists, designers and local residents, who came together to support Shiroiya Hotel. The idea of the hill at the new building was also inspired by Taro Okamoto’s “Bell of the Sun,” which was relocated to Maebashi while the Shiroiya Hotel project was developing.

By embracing diversity, getting involved, and involving others, it is my most sincere wish that Shiroiya Hotel will continue to change and develop along with Maebashi city.” – Sou Fujimoto

It was that sunlight coming through the rawly exposed beams and pillars of the four-story atrium that first inspired me. When it was completed, it took me by surprise, but I realized that we had created something that far exceeded our expectations. I think I surprised myself (laughs). The beams and pillars had already created a sense of depth in the space, but what took it to the next level was adding plants and furniture, which transformed the space into something much more profound. Suddenly, there was this space in front of us that seemed to expand endlessly beyond. The facade of the interior changes depending on your viewpoint — when climbing the stairs or walking around, you can feel the space expanding. It’s a very dynamic and truly captivating experience. This unique space is then completed by various attributes such as Leandro Erlich’s art or Yoko Ando’s textiles. It all comes together thanks to the many pieces that complement each other. It started with inspiration, but it all came to light only thanks to the ideas born through the many discussions we had with different people. I’m deeply moved that it’s finally completed.

We built bridges and stairs in the atrium to make it feel like walking around the city in three dimensions. It’s both an interior space and an architectural space, but it looks more like an urban square, or even, an urban courtyard, than just an atrium. A similar experience can be observed at the new tower when going up and down the riverbank’s stairs. Having both the vintage and new building on site adds to the experience — the old and the new complement each to offer a unique architectural experience and also a very landscape-inspired one. 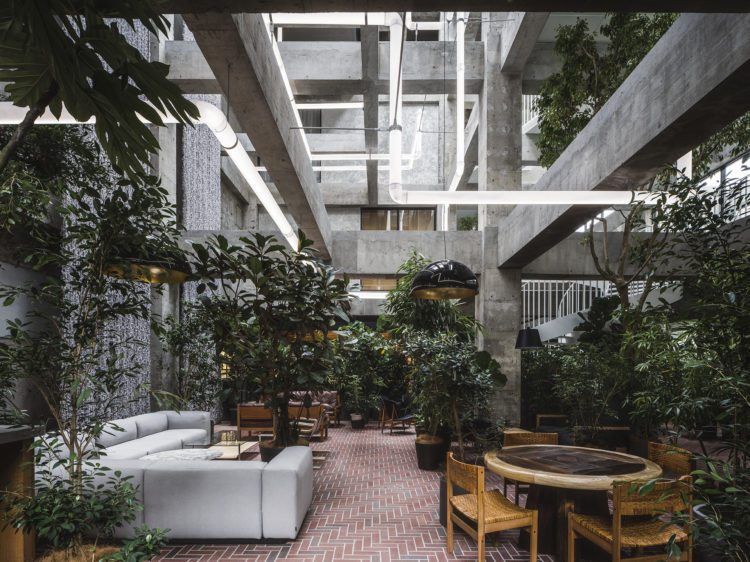 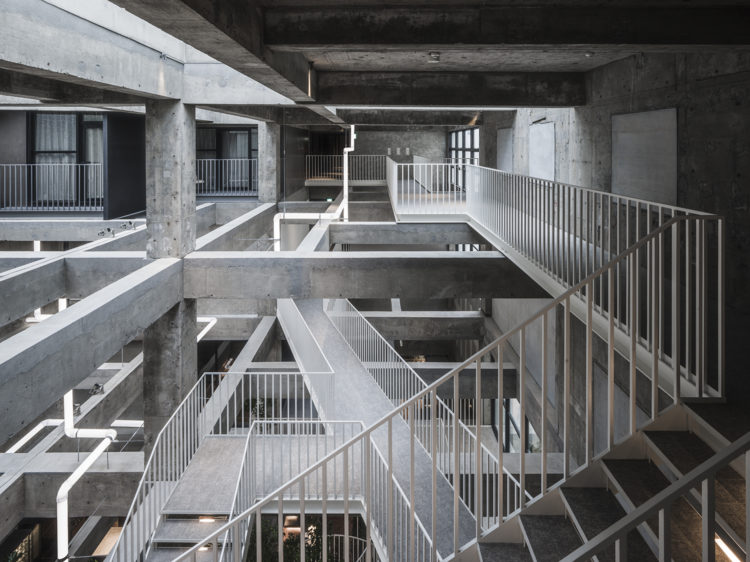 A place where people gather: the city’s “living room”

It all started when I received a phone call from Mr. Hitoshi Tanaka (director of the Tanaka Hitoshi Foundation), who told me that he had purchased the Shiroiya building and was looking to do something exciting with it. He asked me if I would be willing to work together on the project. It was back in the autumn of 2014. So I came to see the building and, quite frankly, it was a very ordinary four-story concrete building. But I think it was then when I first thought that it would be fascinating if we could remove all the floors of that otherwise ordinary building and create a vast atrium that could be used as a hotel lobby, but also as a semi-public space, something like a living room, where people could come and gather. That was the idea I had in mind at the time. I imagined a large place where natural sunlight would shine through the skylight, making it feel almost like a partially open-air space. I also thought that the gap with the building’s exterior would be quite captivating. It struck me that it wouldn’t be only about getting involved in a remarkable architectural project but also a chance to create a brand new core community gathering space. So I called Mr. Tanaka again and told him about my idea. It was evident that we had to downsize the floor area of the building by removing all the floor space, so I immediately made that clear. But I also told him that if he approved my idea despite that, we could be starting a fascinating project. He gave me his answer right away: “This sounds very interesting. Let’s do it!” And so I immediately started the planning. 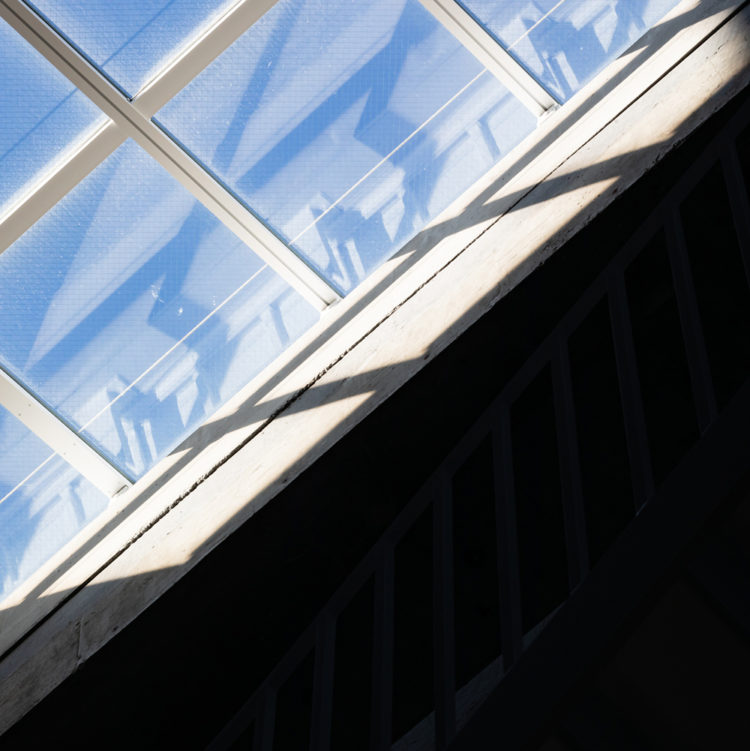 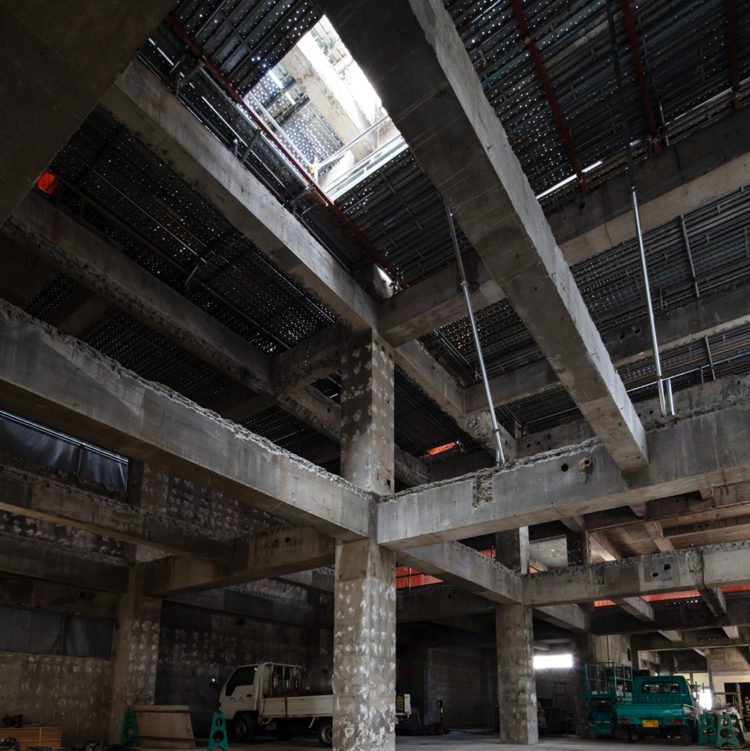 We were all on the same page about the plan for the original building, but we debated quite a lot about what to do with the new building along Babakkawa-dori Street. Babakkawa-dori is a place that preserves its nostalgic look in the best possible meaning of the word. It’s a place where many human interactions take place; a place that’s reminiscent of the good old days; a place that I am quite fond of. At first, I was considering recreating that human-abundant street atmosphere in a typical “Fujimoto architecture” style, but somewhere along the way, I started feeling that this wasn’t the right approach. 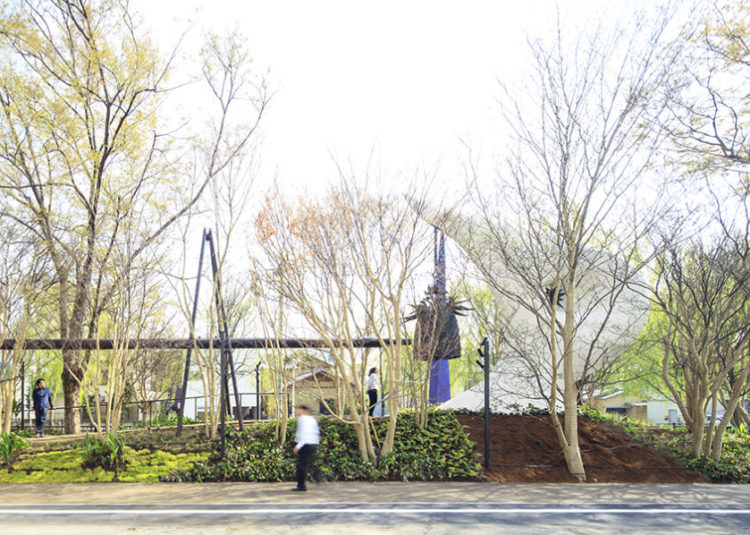 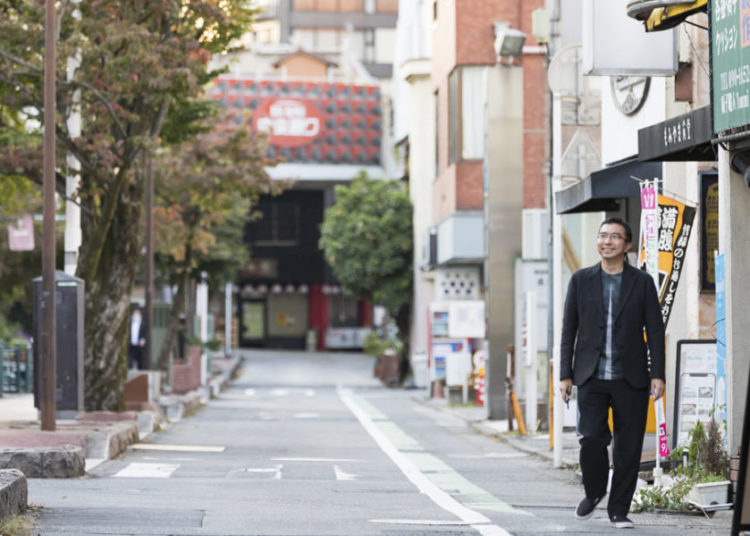 It was around that time when Mr. Tanaka told me that Taro Okamoto’s “Bell of the Sun” was to be relocated to Maebashi and I became in charge of the artwork’s landscape design. I had an idea to install the bell up on a hill; a plan that didn’t work out, but as a result, this inspired the construction of the new Shiroiya Hotel building. I can’t tell for sure whether we can call it “a hill,” a “riverbank” — or a “mountain,” but I am positive that Taro Okamoto’s power inspired me. His spirit either possessed me or gave me the courage to pursue that idea (laughs).

Looking back at the time, I recalled that Mr. Akiomi Hirano, the Director of the Taro Okamoto Memorial Museum, would always say that “merely placing the ‘Bell of the Sun’ beautifully somewhere wouldn’t be interesting at all.” When I thought about the best place to have the “Bell of the Sun” while still carrying an element of surprise, I came up with the idea of having it somewhere deep in the green, on the top of a riverbank. The bell would be somewhere in there, well hidden where you can’t find it unless you dig in well. Somewhere where the artificial (the “Bell of the Sun”) would come in conflict with the natural, and at times it would look as if the natural would win — until the “Bell of the Sun” pushes back again. Those were all ideas running through my mind as I was working on the design. And this way of thinking influenced my work on Shiroiya, which I was working on simultaneously. Just like Taro Okamoto’s bell, which was reborn in the trees and banks of the forest, for Shiroiya Hotel, too, I would envision something new, something odd — in a positive way — something of a completely new urban environment that wasn’t there yet. But when brought in, maybe it would open up the possibilities of the city of Maebashi in the future. I kept searching for a way to make that happen.

A new life begins to sprout 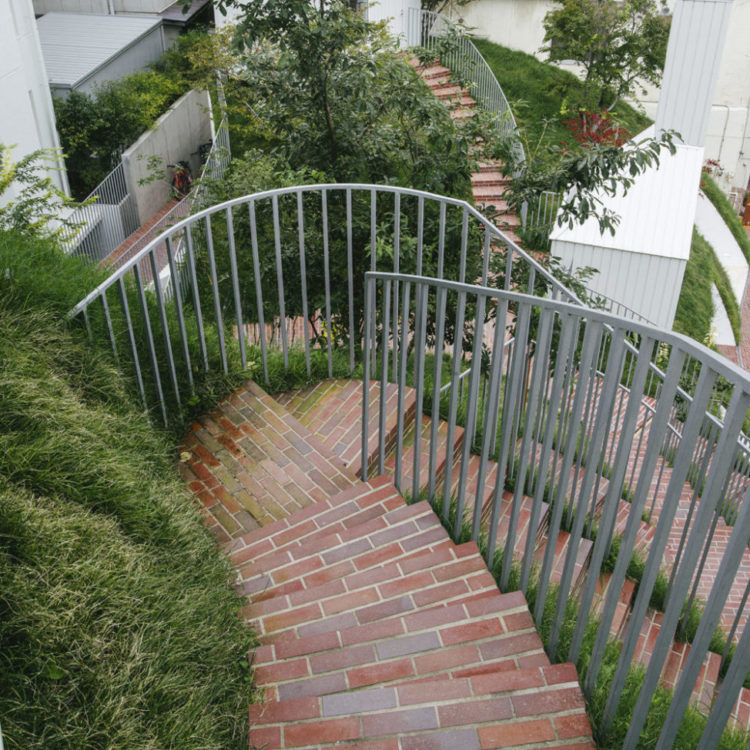 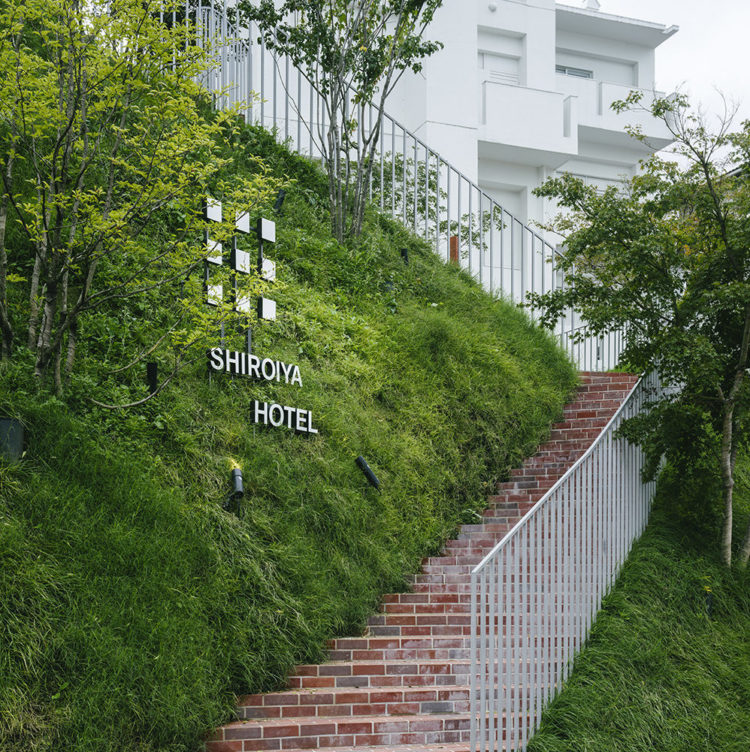 It was just around that time when Mr. Tanaka shared his vision of making Maebashi green. “I want to transform Maebashi into a forest,” he’d tell me. As a native of Hokkaido, I have always believed that forests and groves are the original architectural landscapes. So, with this in mind, I started to develop the idea of having a forest-like, riverbank-like structure that would suddenly appear along Babakkawa-dori. It would be a place of exploration — as you go up the first floor of Shiroiya Hotel, the riverbank landscape expands in front of you and somehow the road far ahead seems to disappear. It’s a place that would make you intrigued about what’s beyond that landscape. It would be a place slightly different from the typical city road, leading to Shiroiya Hotel. This was the concept for the hotel’s building, but simultaneously it was also an urban development and urban environment proposal, which made me extremely interested in it — and so the idea of creating a green mountain-like, riverbank-like building, grew within me. I shared this idea with Mr. Tanaka and the around 10 other team members, and they were all both surprised and impressed by it (laughs). And this is how the foundation for the new Shiroiya Hotel was paved.

There is an element of surprise to see a green mountain in the middle of the city. However, what we had in mind was not to build it merely for the sake of the surprise — we wanted it also to be perceived as something that’s always been there, and yet, something completely new. It was this balance, hand in hand with the surprise, that we were after. I was hoping that it would be the kind of place that breathes life into things — where grass grows and buds sprout; a place where there’s vitality. And that hope was realized.

It is fascinating how your viewpoint changes as you climb the stairs. Perhaps, experiencing the city while walking around like that is a brand new experience. In that sense, I feel like we have created something of great value.

Born in Hokkaido in 1971. Established Sou Fujimoto Architects in 2000. Winner of the Golden Lion at the 13th International Architecture Exhibition — La Biennale di Venezia. Fujimoto became involved with the revitalization of the Shiroiya Ryokan project in 2014 and in 2018 became in charge of the surrounding design of artist Taro Okamoto’s the “Bell of the Sun,” which was relocated to Maebashi city. He was appointed the Expo site design producer for the 2025 Japan International Exposition (Osaka/Kansai Expo).

In Part I of this article, architect Sou Fujimoto spoke about how the renov…