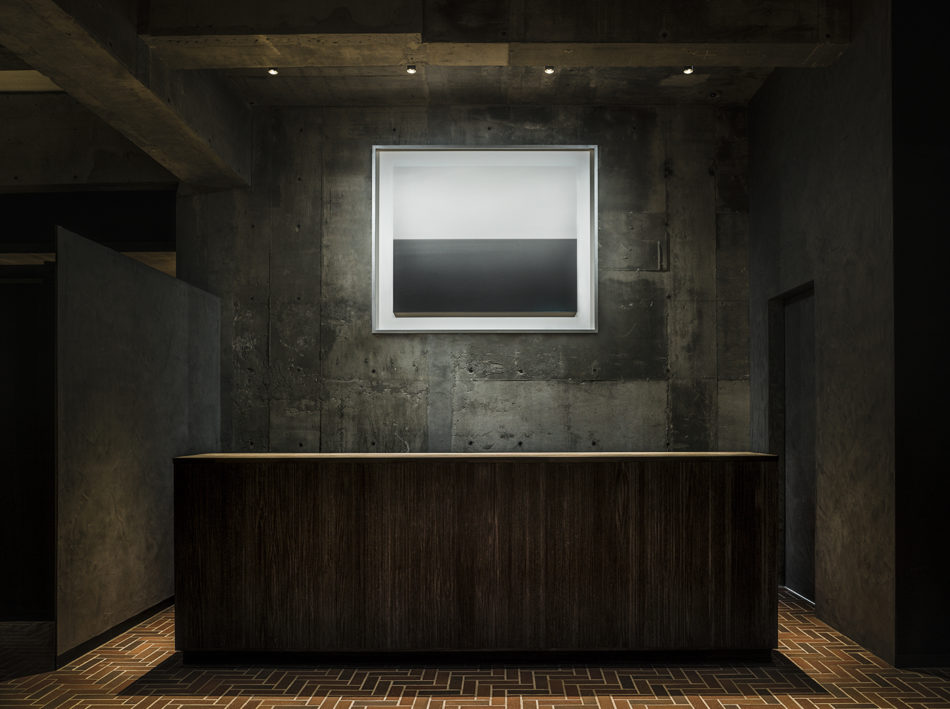 Based in New York, Hiroshi Sugimoto has been creating photographic works from original concepts since the 1970s. In recent years he has expanded his activities to collecting antiques and historical documents, architecture, landscaping, and creating stage sets for Bunraku (Japanese puppet theatre) as he explores the concept of time, human perception, and the origins of consciousness.

To hang in the front desk area of the Shiroiya Hotel, Sugimoto chose his Sea of Galilee, Golan. It has a tranquillity appropriate to a historic hotel, welcoming guests with an image that heightens awareness of their passage from a familiar space to an unfamiliar one.

The work is part of the Seascapes series, one of Sugimoto’s best-known along with Dioramas and Theaters. The unmoving subjects of Dioramas, photographed at the American Museum of Natural History from close range using a wide-angle lens, radiate a sense of presence, sending the viewer’s awareness back and forth between reality and the virtual image. For Theaters, Sugimoto photographed films being shown in a movie theatre, leaving the shutter open for the entire duration of the film to render them accumulations of light. Both of these series shake our human perceptions and question the concept of time.

Seascapes began in 1980 from the question “Is it possible for contemporary people to see the landscapes ancient people saw?” This was the start of a long journey in which Sugimoto photographed horizons around the world, searching for a sea “visualised in our own memory”. All the photographs in the series are divided equally between sky and sea, with infinite gradations of tone. The sea that Sugimoto pursues is not a specific one, but rather a universal image of the sea that slowly emerges in memory. Not only is this the origin of Sugimoto’s awareness, which reaches back to include the distant past, it also evokes of the origin of human awareness itself. The moments captured in these photographs expand far beyond the horizon, guiding our perception to the circulation of time as if to align with eternity.

This photograph was taken at the Sea of Galilee. As this is where the Bible says Jesus performed the miracle of walking on water, Sugimoto chose this work to bring vitality to the area where this hotel is located.

In 1992, I entered the land of Israel for the first time, invited by a museum in Jerusalem. After the exhibition I drove north to the Sea of Galilee. I was interested in this place, called a sea despite actually being a lake, because it was where Jesus Christ began his activities as a religious figure. I felt sure there would be be something spiritual about it, and I wanted to feel that for myself.

After the desert that stretched beyond the Dead Sea, the lake was like a lush oasis suddenly appearing at the end of the world. The pure water had nurtured abundant greenery. The surface of the lake is 213 meters below sea level, and it felt as though a special energy flowed there. I roamed the hills where Jesus is said to have preached until I reached the site believed to be where the miracle of walking on water took place. I assembled my camera obscura and waited to sense the presence of that person walking, guiding light into the black box. This area is called the Golan Heights, and faint war clouds can be seen drifting in the distance.